Today we had an early start to travel across  Melbourne for a meeting with Ben, Acting CEO of Hockey Australia, James and Tom from his team and Suzanne from Hockey Victoria. We spent two hours in a really interesting discussion about our organisations and our social hockey philosophy and offerings, including our presentation of Walking Hockey.  It was spooky how aligned we are in our thinking. It was very rewarding to hear from Ben that Hockey Australia will be adopting Walking Hockey as soon as they can. 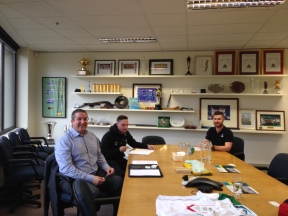 After the meeting we met up for lunch with a friend of the family from England, Hannah, who now lives in Melbourne.

After that, on Ben’s recommendation, we took a tour of the world famous MCG (Melbourne Cricket Ground) and the Sports Museum. This was really interesting as they were preparing the MCG for a soccer game tonight between Brazil and Australia for which they were expecting  a crowd of around 95,000! From the stadium we also saw the Rod Laver tennis centre, home of the Australian Open. 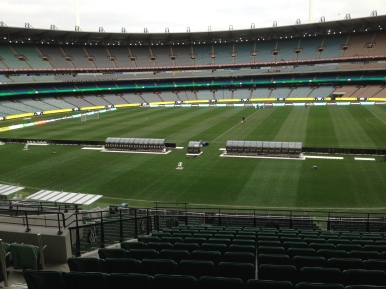 We then rushed off to Albert Park, home of the Australian F1 Grand Prix before very wearily making our way back to our hotel.

Arriving there I checked my emails  to find that we have been invited to Hockey Victoria to see some of their social hockey offerings on Thursday and have been put in contact with Victoria Basketball as they have a Walking programme.