Bromsgrove’s Walking Hockey programme is now part of BROMSGROVE WALKING SPORTS CENTRE, offering Walking versions of football, and netball as well as hockey. We hope to add Walking versions of rounders, rugby and cricket too, once circumstances allow.

Every so often an idea comes along that fits the time, and we believe Walking Hockey is one such idea. Born out of someone wanting to keep playing but finding regular hockey too much, it has really taken off.

On the website find out how Walking Hockey went from an idea to a reality in a few months and how it is now attracting attention across the hockey World.

We have Walking Hockey photos and videos to share and will let you see how its appeal seems universal, from teenagers to nearly octogenarians!

For starters here is a video explaining how we got going and where we hope to get to. It features Alan Gormley, the founder of Walking Hockey and John Inverdale, the well known sports broadcaster.

Our initial programme is as follows

We hope to restart Walking Netball in May and add Walking versions of rugby, cricket and rounders in the summer.

Following the recent announcement from HM Government we have had to suspend all of our sessions until December 4, earliest. Stay safe and hope to see you all again real soon 😊

We are delighted to announce a second weekly Walking Football session is up and ‘walking’ on Friday mornings, 10.30-11.30 on the lower field AstroTurf at Bromsgrove Cricket Hockey & Tennis Club

From Monday 7 September our Walking Football and Walking Hockey sessions return to the AstroTurf at Bromsgrove Cricket Hockey & Tennis Club.

Delighted to inform you that our Walking Hockey and Walking Football programs are back, albeit in a reduced form.

Both are 7-8pm, at Sanders Park, Bromsgrove (Echells Close end), football on Wednesdays and hockey on Thursdays. Sessions cost £3 each. 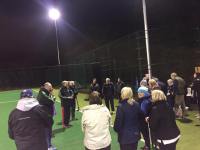